What Is Nutritional Psychiatry, and Can It Help You Feel Healthier? Here’s What an Expert Says

by superadmin
in Nutrition
0

This form of green tea is getting a lot of buzz.t.

When I first heard the term nutritional psychiatry, I instinctively knew what it refers to—because dietitians, myself included, have been talking about the connection between food and mental health for some time, including foods that improve happiness. The emerging field of nutritional psychiatry is supported by numerous studies that expand the understanding of the relationship between nutrition and mental health.

As a result, some psychiatrists now use nutrition as part of the treatment strategy for various mental health conditions. Here’s an overview of some recent research, particularly for depression. According to the World Health Organization, more than 300 million people worldwide suffer from this disorder. It’s the world’s leading cause of disability, and CDC data indicates that the illness is twice as common among women than men.

Research has long indicated that a typical inflammatory Western diet, which includes sugary drinks, refined grains, fried food, processed meat, high-fat diary, and sweets, is associated with an increased risk of depression. A 2020 study, published in the International Journal of Environmental Research and Public Health, outlines several positive and negative associations between diet and depression.

Anti-inflammatory fats, including omega-3s from foods like wild salmon, and monounsaturated fats from avocado and extra virgin olive oil, are also tied to a reduced depression risk, as well as lower blood markers for inflammation. Certain antioxidants, including flavonoids (found in berries, beans, citrus, and apples), are also inversely associated with depressive symptoms. 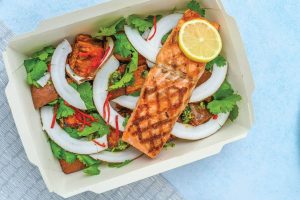 Fish may also offer protection for women. In the 2020 study referenced above, women who ate fish twice a week or more had a 25% lower risk of depression compared to those who ate fish less than twice a week.

Vitamin D is in salmon, sardines, eggs, and mushrooms exposed to UV light, although a supplement is typically required to achieve a healthy blood level of this nutrient. B12 is in animal-based foods and fortified nutritional yeast, and B6 is in chickpeas, potatoes, sweet potatoes, bananas, salmon, and tuna.

Dietary changes can make a difference

A high adherence to dietary advice for depression has been shown to significantly reduce the risk of developing depressive symptoms—including closely following a Mediterranean diet. This eating pattern is rich in vegetables, fruits, fish, nuts, pulses, and olive oil while severely limiting processed foods. In some populations, simply eating more fruits and vegetables has resulted in a 19%–23% improvement in mental health.

One 10-year study also found that among women, depression risk decreased with increased caffeinated coffee consumption. Researchers say the effect may be due to caffeine’s psychostimulant effects, including improved brain function, plus increased sensations of energy and well-being.

Another 2020 study, published in the British Medical Journal Nutrition, Prevention & Health, concluded that probiotics, either taken alone or combined with prebiotics, might help to ease depression symptoms. The relationship is due to what’s known as the gut-brain axis—communication between the brain and digestive tract, specifically the microbiome, the collection of microbes that live in the gut. Positive changes to the type and balance of gut microbes has been shown to help reduce inflammation, improve immune function, and elevate mood. 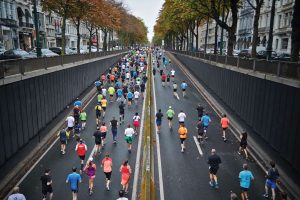 The food/mood connection is unquestionable. Even if you aren’t being treated for a mental health condition, upgrading your nutritional status can help you cope with stress—something we’re all dealing with these days. And improving your diet for better mental health offers other positive outcomes, including potential weight loss, and improvements in immune function, blood sugar, cholesterol, and blood pressure, as well as insomnia.

To learn more about personalized nutritional psychiatry, consider scheduling a consult with a registered dietitian. While a dietitian can’t diagnose or treat you for mental health conditions, she or he can collaborate with your doctor and educate you about the connections between certain foods, nutrients, eating patterns, and your mental health.

Zinc Supplements: What to Know if You’re Thinking of Taking Them

Zinc Supplements: What to Know if You're Thinking of Taking Them